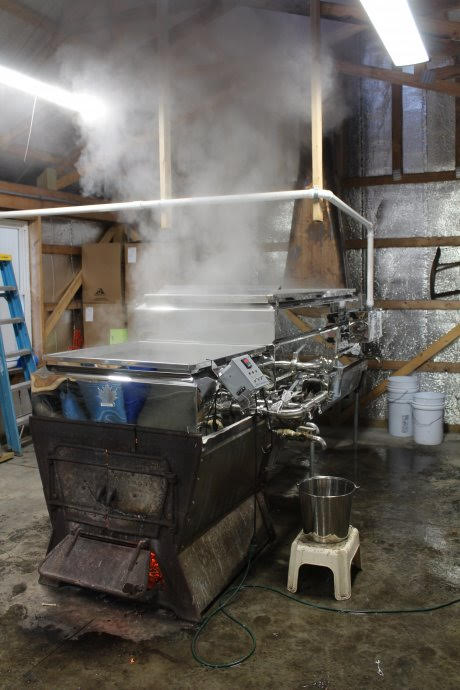 
Front Porch Sugarhouse began when I was a teenager in my family of 11. I expressed interest in tapping trees and Dad got permission from the landowner, to tap a maple growe in the woods behind our place. We tapped and took it to friends’ to get it boiled down.

Those first years were small and provided syrup for our family’s table for the year. Later we tapped larger amounts of trees but I was always disappointed to take it somewhere else to have it boiled down because I thought that looked like the best part— running the evaporator and taking syrup off.

I talked a lot about owning my own sugarhouse and in the summer of 2017 we began the new venture, Front Porch Sugarhouse, by purchasing a used evaporator and putting up the sap shack. My Mom was not too certain about the whole thing… especially putting up the building and all. She was thinking it would turn out to be a “passing fancy” for a young guy, who would soon leave it all and she would have to add it to her “to do” list. I told her, at that time, that I was doing it for my younger siblings, to have a project we could all do together.

That is exactly what has happened as the business has grown and they have grown older. The whole family looks forward to the “syrup season” and I couldn’t do it without their help. They dump the bags of sap into buckets and haul a lot of them in the woods. It really is a family business with everyone doing a part. Even the married siblings come home to help along with their children.

It is known by all that during the boiling season the sap shack is open for anyone wanting to stop by and see, enjoy and be a part of the syrup making process. At “draw off” time, we bring out ice cream, peanuts, and coffee.

It is a delicious combination: cold ice cream, FRESH off the evaporator maple syrup, and a GOOD cup of coffee. Can’t know ’til you try it.

We strive to make a quality product for the public and having happy customers is our goal.

We are a state inspected facility.

Back to Sugar Camps