The 2022 Sugar Camps will be announced in January. In the meantime, feel free to contact any of these sugar shacks directly about purchasing syrup as it is available! Visitation of the sugar bush and evaporator are all outside, however, we request that visitors wear masks and maintain the standard social distance. The main house will not be open. Refreshments will be individually sealed in grab and go bags. 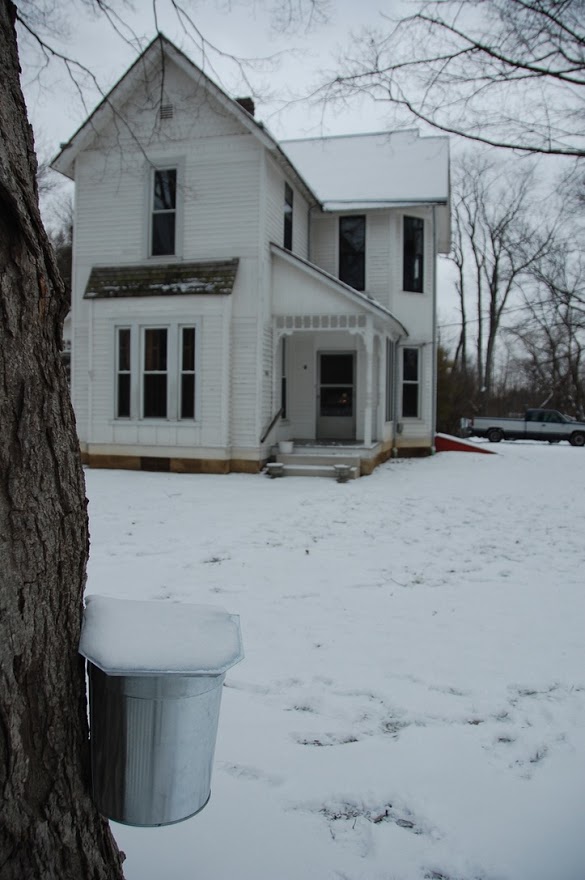 History
The original 40 acre-property was settled by John Henry Hinkle and Laura Rawlins Hinkle in 1886. They lived in a log home until the current Queen Anne style main house was constructed in 1892. Over time the property grew to 82 acres, with additional farm land nearby, and was a typical family farm of crops and animals. The outbuildings that survive are the 1920s dairy barn, early 1900s grain barn and blacksmith shed, and the early 1900s carriage house converted to a garage in the 1920s.

The Hinkle’s only child, Henry Ernest Hinkle, married Bertha Rogers. They had two surviving children, Daisy Estella (1 Jul 1908 – 16 Feb 2003) and John Henry (8 Aug 1914 – 1 Apr 1994). The second house, built in the Free Classic style, was constructed for this second generation family around 1910. Henry continued the family farming business, but slowly converted much of the property to his horticulture business. Hinkle’s Dahlia Gardens grew to become Tenth Street Floral Gardens, with dahlias, peonies and gladiolus being featured.

From an early age, Daisy had a love of music and pursued it as a career. She studied at Indiana University and elsewhere, and then taught at various locations. When she accepted a position at Murray State College, she renewed her acquaintance with fellow IU music alum and Murray State instructor, Joseph N. Garton. They were married in 1939 and moved back to her family farmstead in 1941. Daisy then began teaching music in the local schools, traveling to a different school each day, and after his service during WWII, Joe commuted to Indianapolis to teach in the public school system. They also gave private music lessons in their home, and performed publicly themselves. Throughout it all the Gartons maintained many aspects of the farm Daisy loved, such as limited crops and animals. Over time the Gartons reduced the size of the property to the current 11.08 acres.

Joe Garton passed away in 1983. When Daisy passed away in 2003, she left the property in her trust to an organization that would preserve it and operate a museum within the main rooms of the first floor. Bloomington Restorations, Inc. accepted the challenge and received the property on December 1, 2004. The second floor of the main house contains BRI’s offices, while the rear former apartment (originally the wood shed and summer kitchen) is rented as office space. The second house remains a residential rental with two units.

Currently
The site operates year-round with regular open days falling on the last Saturday of the month except November and December, when a special holiday open day takes place. Additionally, workshops are held periodically throughout the year and the site occasionally hosts special events. Major annual activities include Maple Syrup season from January-March and the Daisy Days Native Plant Sale in April.

Guests visiting the historic farmstead during Maple Weekend will be able to tour the sugaring operations and learn about the process, purchase maple syrup, do-it-yourself maple tree tapping kits, and books related to maple syrup, and sample refreshments made with maple syrup. Jam and jellies made onsite by volunteers will also be available to sample and purchase.

Back to Sugar Camps